We’re building a movement together

Ace and aro leaders around the world are leading the way to a brighter future, and we’re proud to provide our community with tools and resources to enable all of us to grow together!

Sign up to hear how you can get involved:

Image description: Several people march in a pride parade behind a white banner. The frontmost person has brown skin and chest-length dark brown hair, is wearing sunglasses, a flower crown, and a black shirt, and is waving.
​

It’s thanks to supporters like you that we’re able to create lasting change. Could you help us make an even greater impact?

Of all the work we do, we’re especially proud of these projects for the impact they have on our community.

This website acts as a hub for our community, empowering thousands of people to get involved in their community every year. By connecting people to local communities and events, educational and support resources, and stories from the community, Aces & Aros provides a vital link to their community.

“Aces & Aros has been so helpful in providing informative resources to our community, which has amplified our regional work in so many ways!”

Founded as Asexual Awareness Week in 2010, Ace Week is the largest annual campaign for awareness, education, and progress in our community. In 2019, the founder of Ace Week entrusted our team with coordinating the campaign into the future, and we’ve been fostering and growing it ever since!

From humble beginnings as a small conference planning team, we’ve grown and acheived so much over the last 9 years!

Our organization could not exist without the tireless efforts of advocates who have been laying the foundations of our movement since the early 2000s.

Asexual Outreach was born just a few years after the first ace communities began organizing in-person events and gatherings; in fact, it was the 2014 International Asexuality Conference, hosted by AVEN, that inspired our co-founders to create Asexual Outreach later that year.

Our first major event, hosted in 2015, was a conference in Toronto that brought more than a hundred attendees together for two days of learning, sharing, and community building. That same year, we developed our first series of educational materials with the input CJ Chasin, Eriol S., and members of Ace Toronto.

In the fall of 2015, our team published our Ace Inclusion Guide for High Schools. With the help of our donors, we mailed inclusion kits containing this book to several dozen high schools. 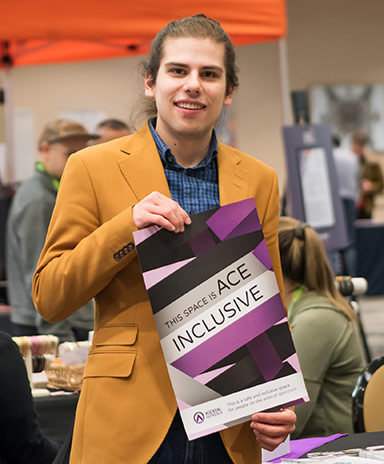 Image description: A nonbinary white person in a mustard jacket and dark blue, checkered, collared shirt holds a poster with purple, gray, black, and white stripes that says "This Space is Ace Inclusive". They are in an exhibition hall with an orange canopy tent, and several people are visible in the background.

Having been with the organization since it was first conceived, it's been remarkable watching how our work has grown to impact countless members of our community.

Shortly after our founding, our team identified a clear need for a national organization that could support smaller local initiatives, and we began working to realize that vision.

In 2016, we expanded our board to include leaders from communities across the United States and Canada to ensure our efforts were designed to best support the ongoing needs of our community. Then, to give greater structure to our efforts, we became the first ace/aro organization in the world to incorporate as a nonprofit organization and to attain tax-exempt status.

That same year, our team began working on Aces & Aros: a community hub that now connects tens of thousands of people to local events, community groups, educational materials, and resources each year.

As we moved to more equally include the aro community in our work, we began focusing on recruiting team members with a passion for aro advocacy. Today, most members of our leadership and volunteer teams are aro, and we’re proud of the work we’ve done to incorporate equitable aro representation into our projects and resources.

Through our newsletter, you'll hear about events happening in your city, stories about community advocacy, and much, much more!

Since 2014, our team has developed numerous projects and campaigns that drive lasting change every day!

So much of our work draws on the advocacy efforts of queer and trans folks who have come before us: especially the Black and trans activists who have long led the fight for queer liberation.

We know just how life-changing it can be to be welcomed into a community who supports you for who you are, and much of our work has gone into creating inclusion for ace and aro people in LGBTQ+ spaces.

Over the years, our team members have marched in dozens of pride parades across the country, and have helped new community groups organize their first marches and pride activities. In recent years, we have been creating a library of photographs that portray the diversity and joy of our communities as they show off their pride. With these photos, community leaders have been able to better tell their stories and enhance their advocacy work.

Since 2015, our team has worked in conjunction with other community leaders to promote ace and aro inclusion at Creating Change: the world’s largest annual LGBTQ+ advocacy conference. Our work builds upon the foundations laid by incredible community leaders who have been fighting for progress for more than a decade. Over the years, our team has: 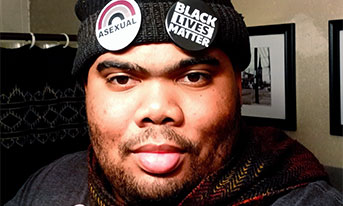 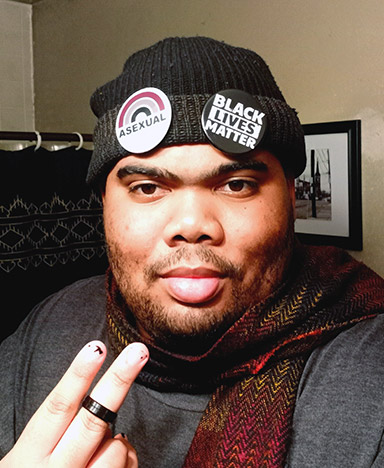 Image description: A Black man with a short beard, visible from the chest up. He wears a dark gray sweater, a chevron-patterned red and gold scarf, and a black beanie with "Black Lives Matter" and "Asexual" pins attached to it. He holds up two fingers, and wears a black ring on his middle finger. He is in front of a black shower curtain, beige wall, and framed photo.

It means a lot to be part of this organization, to be able to connect BIPOC aces and aros with vital resources and content is massively important to our community as a whole!

Community groups—both online and off—are the bedrock of our movement. Not only do give countless people a sense of belonging, they’re also leading the way toward a brighter future!

We've long been amazed by the impact of connecting people to local communities, so in 2018, we created a website to help ace and aro people find their community and get involved.

Today, Aces & Aros serves as a hub for our community. The website hosts a map of almost every English-speaking community group in the world, as well as a regularly updated list of community events. Beyond that, the site connects community members to resources and stories, helping them stay up to date with the latest community news, and giving people tools to become better advocates.

Since community groups play such a central role in our movement, we work hard to support community leaders so that more ace and aro people can have access to communities.

Alongside hosting occasional events and meetings where community leaders can meet one another, learn from each other, and refine their organizing skills, we also host an online community where leaders can reach one another whenever they’d like!

We’re continually developing new tools and resources to help community leaders organize events, learn new skills, and reach ace and aro folks in their area. One day, we hope to grow our network into a thriving community where established leaders can mentor newcomers, where organizers have opportunities to collaborate with one another, and where we can collectively impact meaningful change on a social and governmental level.

Image description: The back of the head a white person watching a pride parade. The person has a colorful hat and a ponytail holding small ace and aro flags. They are looking at a blurred group of people celebrating in pride parade.

Aces & Aros is an online hub that connects you to local communities, events, resources, and stories. If you've ever wanted to get involved in a community group, keep up to date on our community's latest news, or access ace and aro resources, our website has you covered!

There is incredible power and possibility when people unite to fight for a cause, and Ace Week has been the home of remarkable advocacy since it began in 2010.

Ace Week is an annual event that puts asexuality in the spotlight. Part celebration of the progress we’ve made as a community, and part campaign for greater understanding and acceptance of asexual-spectrum identities, Ace Week is a time to focus on all things ace.

Our team officially began coordinating Ace Week in 2019 when the campaign’s founder—Sara Beth Brooks—entrusted us with its future. Since then, we’ve created resources and educational materials that community organizers can use in their own advocacy efforts, we’ve broadened the scope of the campaign to encourage advocacy beyond awareness, and we’ve built up a robust infrastructure to support the grassroots community efforts that have made Ace Week what it is for more than a decade.

Image description: A smiling person with brown skin, glasses, and long wavy dark-brown hair. They are wearing a black long-sleeved floral shirt and are holding a large ace flag behind them with their outstretched arms.

Aces & Aros is an online hub that connects you to local communities, events, resources, and stories. If you've ever wanted to get involved in a community group, keep up to date on our community's latest news, or access ace and aro resources, our website has you covered!

Our leadership team is comprised of leaders and advocates from various ace and aro communities. The personal experiences and insights each person brings helps inform our work and keep our organization true to its values.

Want to join our board?

Are you interested in helping determine the direction our organization moves in the future? We'd love to hear from you!

Our board welcomes applicants from ace and aro communities. We especially encourage applications from those who are Black, Indigenous and people of color, Disabled and/or neurodivergent people, and trans and/or nonbinary people.

Want to join our board?

Are you interested in helping determine the direction our organization moves in the future? We'd love to hear from you!

Our board welcomes applicants from ace and aro communities. We especially encourage applications from those who are Black, Indigenous and people of color, Disabled and/or neurodivergent people, and trans and/or nonbinary people.

Our volunteers help us share resources and stories from our community, plan for events like Ace Week, create educational materials, and more!

Fill out an application

Have a question about our work? Interested in starting a fundraiser? Want to interview us for a news article? We'd love to hear from you!

You will receive the fastest response by contacting us via email, but you can reach us on social media as well!

Send us a message